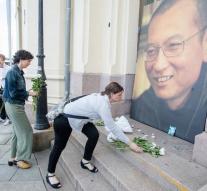 peking - After the death of dissident Liu Xiaobo, China has pointed out to other governments that they should not interfere with 'internal affairs'. Other countries criticizing the way in which Beijing dealt with Thursday's deceased Chinese winner of the Nobel Peace Prize must respect China's justice system and sovereignty.

That said a spokesman for the Ministry of Foreign Affairs on Friday told Xinhua State Press Office. 'Other countries are in no position to make unjustified blame. '

Liu was sentenced in 2009 to eleven years imprisonment for 'undermining the state power' by publishing a civilian party. He died in a hospital at a cancer clinic on Thursday. His wife Liu Xia is living in Beijing and is under house arrest. France, the United States and the United Nations called on Liu Xia to give her freedom of movement on Thursday