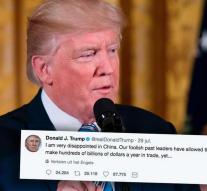 peking - Chinese state media have rejected the criticism of US President Donald Trump that the country is doing too little to address the North Korean crisis. Trumps claim is 'wrong,' the party told China Daily Wednesday.

Beijing has every reason to feel unfairly treated, 'because it has worked hard to find a peaceful solution to the crisis,' the newspaper said. The solidarity formed between China and the United States as a result of Pyongyang's nuclear program will 'crumble' because Washington's allegations do not stop, the newspaper said.

Trump has warned China in the final words last weekend after the last missile test of their ally North Korea. 'I'm very disappointed in China,' wrote Trump in a Twitter message.

China earns hundreds of billions of dollars annually on trade with the US, but in the case of North Korea nothing matters, except Trump. 'We will not allow it anymore, China could easily solve the problem,' Tweette Trump.