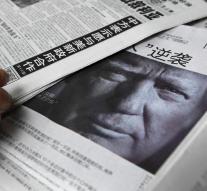 - China has responded to comments delivered Monday of the upcoming US presidential Donald Trump. He let himself in an interview critical of the traditional principle of American government that Taiwan is part of China.

'I do not know why we should adhere to the one-China policy, unless we make a deal with China which also covers other issues such as trade,' Trump said in an interview with Fox News Sunday. The issue is sensitive because Taiwan is seen by Beijing as a rebel province.

The Chinese Foreign Ministry responded also worried. A spokesman stressed that the one-China policy is the basis for the relationship between Washington and Beijing. The United States broke diplomatic relations with Taiwan in 1979 and established them with the PRC.