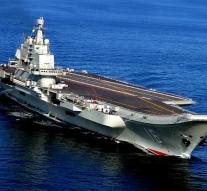 - China is a second aircraft carrier to the building. Designed in their own country, according to the Defense Ministry in Beijing Thursday. It is not known if the ship has to sail.


China has an aircraft carrier, the Liaoning. Which is second-hand. It once belonged to the Soviet Union and later Ukraine. In 1998 the ship was sold to a Chinese businessman, who wanted to make a floating casino-hotel. Those plans, however, fell into the water. In 2002, the Chinese navy ship began to build. The aircraft carrier was delivered in 2012.
Until 2030 China is considering a total building make six or seven additional aircraft carriers. That would make China a formidable competitor for the United States.
China has border disputes with several countries in the region. Thus, China claims virtually the entire South China Sea. The area is important because there is likely to find a lot of oil and gas.
More than ten countries currently have an aircraft carrier in use. Netherlands from 1948 to 1968 had a ship, the Karel Doorman. Which was purchased from Britain and sold to Argentina. Around the turn of the century the ship was scrapped in India.
NEW