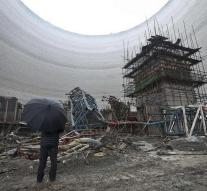 - Police in China have arrested nine people in connection with the fatal accident at a construction site of a power plant. 74 people were killed Friday when they were buried under the debris of a collapsed scaffolding and platform.

Among those arrested were the boss of the construction company Hebei Yineng, an engineer and two security guards, post the Chinese news agency Xinhua. The cause of the accident is not yet known, but we worked under high pressure in the workplace according to anonymous workers.