Home / World / China and the EU have found each other 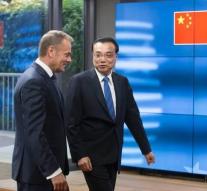 brussels - The EU and China are going to intensify their cooperation significantly. The two trade forces are 'determined' to counter global warming. Politically, economically, technically and scientifically, they get the tires.

Following the 'most promising summit' in Brussels, the EU and China have found each other, although there is still much discussion, EU president Donald Tusk said Friday after consultation with Chinese Prime Minister Li Keqiang. According to Li, 'changes and destabilizing factors' in the world order require 'uncertainties'.

Tusk and the President of the European Commission Jean-Claude Juncker received Li and a host of ministers on a long-term summit, which became extraordinary by Thursday's decision of President Donald Trump to leave the Paris climate agreement. 'That's a big mistake,' said Tusk.

The agenda also featured trade, the investment climate and human rights. The conversations were less flexible. 'We're not there yet,' Juncker said. The EU denies China to complicate foreign investment. Also, Brussels wants Beijing to stop subsidizing steel on the European market.

While Amnesty International demonstrated outside and called on the EU to condemn the violation of human rights, the lack of freedom of the press and the death penalty, Tusk stated that it would soon be discussed further.

The press conference after the end ended in a happy atmosphere. Juncker missed the last question because his headphones were broken with the Chinese translation, he said. Li responded: 'Not Made in China!'