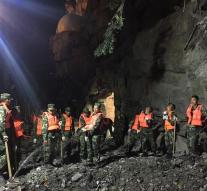 peking - China was hit again by a heavy earthquake on Wednesday morning. The Chinese authorities reported an earthquake with a force of 6.6 near the Chinese city of Yining, in the western province of Xinijang, near the border with Kazakhstan. There is nothing known about the damage and potential victims.

On Tuesday, an earthquake took place in the middle of China, with a force of 6. 5. In the province of Sichuan, that quake was detected. The death toll of this quake has now been raised to nine, including six tourists, reported local authorities. At earthquake in a remote area near the Jiuzhaigou Nature Reserve, 164 people were injured.

In addition, heavy summer rainbreaks in many parts of the country cause floods and landslides. Especially Sichuan was hit hard. In an earthquake, 24 people came to life on Tuesday. In the province, 31,500 tourists evacuated. The affected area is especially popular among Chinese tourists.