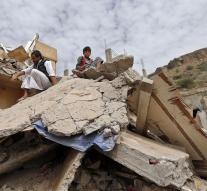 dubai - By air attack on the capital of Sanaa of Yemen on Friday, 12 people were killed, including six children, reported rescuers.

The attack in the Faj Attan area on the outskirts of the city also damaged two buildings seriously. Witnesses told Reuters press agency that the hunting planes were presumably of the Saudi Arabia-led international coalition that had been conducting a 2.5-year campaign against Houthi rebels. During the war in the country about 10,000 people have already died.

The Houthi's and their ally, former president Ali Abdullah Saleh, control a large part of the north in the country, including Sanaa. The internationally recognized government of Yemen is supported by the international coalition and is located in the south.

The United Nations Human Rights Office has asked for an independent air-attack investigation by a coalition at a hotel in Sanaa last Wednesday. In addition, more than thirty people came to life.