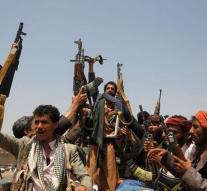 sanaa - At least ten children were killed by an air strike in northern Yemen. More than twenty other children were injured, according to MSF Saturday.

According to representatives of the Houthi population has been hit a school in the airstrike. The action would be coordinated by the Saudi air force.

Recently stalled peace talks between Houthi rebels and the Yemeni government recognized by the international community. Saudi Arabia is an ally of the internationally recognized government of President Abed Rabbo Mansour Hadi and the Houthis bombarded from the air. According to the UN take the Saudis also regular citizens.