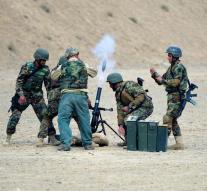 kabul - Playing with a mortar shell has four Afghan children killed. Seven other children were injured. A police chief said Tuesday that the incident took place in a village in Char Dara district in the northern province of Kunduz.

In Kunduz's Char Dara the Taliban stronghold. Kunduz province where the Netherlands carried out a police training mission until 2013. For months carry the Americans and the Afghan army attacks on positions of the Taliban in Kunduz.