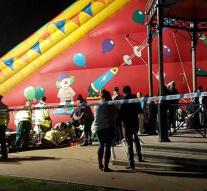 woking - At least six children were injured when an inflatable slide collapsed at a fair in the English town of Woking. This is reported by various English media. How that could have happened is not yet known.

The accident occurred at the moment that a fireworks show would start in the park. The park was immediately cleared after the incident.

Witnesses saw a trauma helicopter landing. Some children have been removed by ambulance and others are being treated on the spot by their wounds.