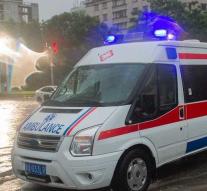 beijing - The man who entered Thursday on a group of young students in China, according to the authorities, consciously did. The 29-year-old man would be 'depressed' because of marital problems, reports the newspaper South China Morning Post. There would have been no drink or drugs in the game.

The motorist drove in on a few dozen crossing children in the city of Huludao on Thursday. There were five deaths and eighteen wounded. The driver drove through after the attack, but could later still be arrested.

The local authorities say that because of his relationship problems the driver had a desire to ride on any target. On camera images you can see how the car changes from road and then creates the students.