Home / World / Children get around at plane crash Bosnia 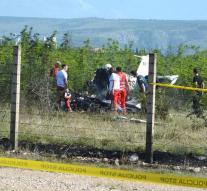 sarajevo - In the event of a minor plane accident near the city of Mostar in Bosnia and Herzegovina, the pilot and four occupants were killed. Three of the victims are children.

The plane crashed on Saturday afternoon for an unknown cause and flew in a field not far from Mostar Airport, reported emergency services on-site. According to local media, the airport held an open day on Saturday that people could jump out of parachutes. Round trips were also organized.

How many passengers were in the plane and whether there are survivors is not yet known.