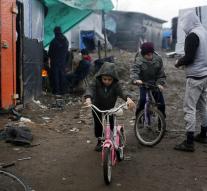 - A large proportion of the children who stay in the French refugee camp in Calais, goes to England. According to the BBC English and French rescuers register the number of unaccompanied children in the camp that wants to travel to relatives in England.

The Children's Ombudsman of England reported earlier that around three hundred children from the camp of Syrian and Afghan descent, will be brought to England. The refugee camp near the Channel Tunnel in Calais, that because of the harsh conditions also called 'the Jungle' will be cleared soon.