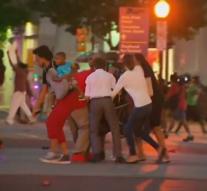 dallas - There seemed to be no problem to air Thursday night in Dallas. On the big demonstration against police brutality were like, although many people come down in other cities, but everything went peacefully to it. Until the first shots fell. Families with children pitched headlong flight.

Videos and photos, the panic among people to see. People with small children look terrified refuge. Others stand around a stroller to protect a small child.


Ultimately reveal that the participants in the demonstration, but the police are the target of the gunmen. Five policemen are killed. Another six others wounded.