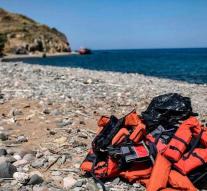 ankara - At least nine people were killed because their boat capsized off the Turkish coast. It concerns seven children and two women, says the district head of Kuşadasi against the Turkish state press agency Anadolu. They tried to illegally cross over to Europe according to the authorities.

The boat ran into problems with the Turkish province of Aydin. The Turkish coast guard then sent a rescue team on the road. A helicopter and a plane also provided assistance. The relief workers managed to save four drowning people. They found nine bodies in the sea. Nothing has yet been published about the nationality of the victims.