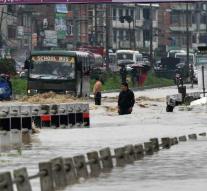 kathmandu - A landslide in Nepal killed eight children and a woman. Two houses were covered by falling rocks in the Bheri area, the Kathmandu Post newspaper reports. The child victims were between three and twelve years old.

Rescue workers could get a man alive from the rubble after one and a half hours. He told the newspaper that he was in the kitchen with his wife at the time of the landslide. The children were studying at that time. 'We suddenly heard a loud bang. Our house was buried very quickly. I do not know what happened next. '

One resident complained that the emergency services arrived only one and a half hours after the first report, while there was a police station 200 meters away. As a result, possible opportunities have been missed to get victims out of the rubble alive. The authorities say that the relief effort was delayed due to continued rainfall and mudflows in the area.