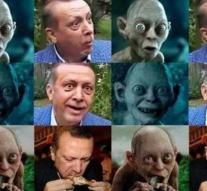 ankara - A man in Turkey put the then Prime Minister Recep Tayyip Erdogan in picture compared with the character Gollum from The Lord of the Rings Thursday of parental rights in 2014. Reported newspaper Hurriyet. Rifat Cetin was found guilty of insulting the president. Besides the loss of his child Cetin also received a suspended sentence of one year, with a probationary period of five years.

Cetin wondered aloud after the verdict how he could be sentenced for insulting the president, as he set the comparison on the Internet when Erdogan was Prime Minister of Turkey. He told newspaper Birgun to appeal against the verdict.

In all recent years, more than 1,800 people in Turkey accused of insulting Erdogan. Among them are journalists, cartoonists and a former Miss Turkey.