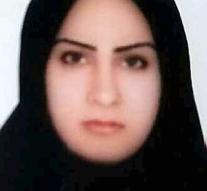 - The tragic fate of Zeinab Sekaanvand: the death of her baby has ushered her own death.

Iran is executed within a few weeks because of the murder of her husband, whom she allegedly committed at the age of 17. Zeinab got respite after she became pregnant in prison by a fellow inmate. But late last month her baby was born dead, capital punishment is still running.

To the anger of human rights organizations. With the planned execution Iran is violating an international treaty that prohibits imposing the death penalty on people who commit their crimes at minor age. Nevertheless, the Muslim country already has 76 young criminals executed over the past decade. Amnesty was Zeinab, now 22 years old, besides a fair trial.

Kurdish comes from a poor and conservative family in the north of the country. She walked to the age of 15 away from home to marry four years older Hossein Sarmadi; Iran can girls on their 13th and boys perform their 15th marriage. The relationship ended with the death of Sarmadi.

Stabbed by his wife, claiming the authorities. Zeinab initially confesses she would have reached her heinous act by constant mistreatment and abuse. Later, she draws in her statement. Not she but the brother of Hossein, who raped her regularly would have killed him.

Brother Zeinab then forced to make a confession with the promise to pardon her down, such as the family of a murder victim that can do according to Sharia. However, the judges did not listen and sentenced her to death.\n  \n  \n   advertisement

A penalty that may already be accomplished today.