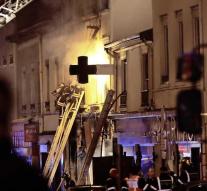 lyon - In a fire in a building in the French city of Lyon, two people were killed on Saturday night. Four others were injured in the fire that was preceded by an explosion. Below the…

'Two bodies were found, a woman and a child', the Lyon prosecutor said. Research must show exactly what has happened.

The fire and the explosion would have been in a bakery. The newspaper Le Parisien writes that one of the wounded from the second floor of the building jumped out of a window.