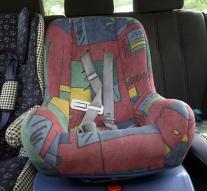 bludenz - A 2 year old boy died in Austria because he had been left in a silly car for hours. The 17-year-old mother and her friend had left the dreams in the car because the child was sleeping well after a long drive. The two went in and fell asleep.

When they wanted to get the child out of the car hours later, the boy died, police announced. The official cause of death is not yet fixed, but it is suspected that the boy's death became fatal. If so, the mother will be prosecuted for death by guilt.