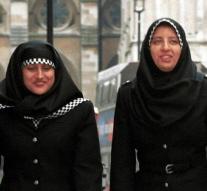 amsterdam - The headscarf will not be part of the police uniform for the time being. That has decided to make a decision by Corpschef Erik Akerboom.

'At this moment, I find that there is clearly no support for this idea. The discussion polarises the ranks inside and outside the police, 'Akerboom responds in the AD on the issue.

According to the governor, the discussion about the plan was derailed. 'Both inside and outside our organization went and goes wrong with front and opponents. 'He claims that the standards of compliance have been exceeded.

Last week, Amsterdam police chief Pieter-Jaap Aalbersberg announced that admitting the headscarf was a serious option to recruit more immigrant agents. In this way, he wanted to create more diversity in the police so that the corps would be a better reflection of society.