Home / World / Chief John Kelly: I'm not getting up 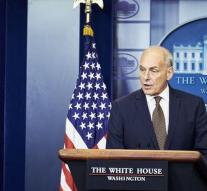 washington - The White House Chief of Staff John Kelly has blown the rumors that he is so frustrated that he wants to get up. At the same time, he surprised with remarkable remarks for Rex Tillerson, who might be against President Trump's sore leg.

'I'm not leaving and I'm not fired,' said the ex-general on Thursday during the daily briefing, where he rarely appears himself. 'But it's really a very hard job, with huge challenges. '

Kelly told him that he had encountered numerous problems that had been delayed, but asked for a solution. He was smiling at the fact that only one organization in the White House had been placed.

The most important international problem is according to Kelly the Korea crisis. He was delighted with the performance of the Ministry of Foreign Affairs in this matter. That's remarkable because President Trump named Pyongyang's diplomatic approach to time-wasting, and Rex Tillerson, minister of justice, on Twitter.