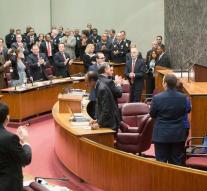 - Mayor Rahm Emanuel of Chicago has Wednesday before a crowd angry residents of his town excused for the way he dealt with the death of a black boy. The seventeen year old Laquan McDonald was struck in 2014 by sixteen bullets from the gun of a white policeman.

Police Officer Jason Van Dyke has been officially accused of murder. He defends himself by saying that he felt threatened by the boy because he had a knife. Especially after the recent movie of the shooting was released, recorded by the camera in the police car, the emotions ran high in Chicago. Emanuel was among more accused of having the case to cover up.In an emotional speech, the mayor promised to investigate the system will review police business entirely. He also appoints a special committee to critically examine how the police can regain confidence.
NEW