Home / World / Chemical plant in Texas is being exploited 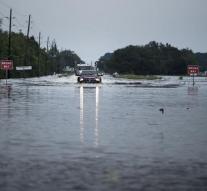 houston - A chemical plant near Houston is jumping. Due to the hurricanes caused by Hurricane Harvey, the power supply and thus the cooling have dropped, causing the chemical used in the factory to become heated. Without cooling they will catch and explode flames, said the topman of the North American branch of the French chemical company Arkema.

At what time this will happen, Director Richard Rowe could not predict. But if it happens, the reaction will resemble a gasoline fire: explosive and intense. There will be smoke development that may stimulate skin, eyes and lungs, but long-term effects would be limited.

The factory is located in Crosby, 40 kilometers northeast of Houston. Residents in a 2.4 kilometer radius are evacuated. The factory produces organic peroxides that are used in the production of synthetic resin, polystyrene and paint.