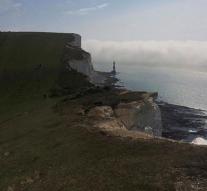 eastborne - More than a hundred people had to be treated in hospitals after a kind of chemical mist from the sea had reached the coast of East Sussex County in southern England. It was about visitors to the beach and the cliffs near Birling Gap, near the coastal town of Eastbourne.

Doctors were told Sunday evening and night to Monday with people complaining about irritations of eyes and throat. The police informed that they could not yet find out the cause of the chemical cloud.

Visitors to the coast saw the cloud drift in the afternoon. According to The Guardian, it was thought that it was a common fog bank. However, as soon as the spray reached the coast, auxiliaries received the first complaints about eye and throat irritations.