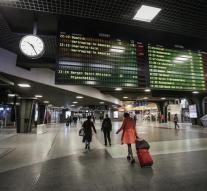 brussels - In railway stations Brussels-Midi, Antwerp and Liege will soon put down security gates. International transit passengers and their luggage that can be checked from the beginning of 2017.

That the Belgian Minister for Mobility François Bellot replied to questions from parliament, Belgian media report. The checks are not systematically ' but depending on the risks and also randomly deployed, 'said the minister.

Since the reopening of the railway station of Brussels Airport after the attacks of 22 March, to rail passengers and their luggage already checked. The gates at the stations from Brussels, Antwerp and Liege arrive at the entrance to the platforms or zones for international rail traffic.

The Belgian authorities also wish to gain access to the passenger lists of cross-border rail, bus and ferry traffic. The EU countries have already adopted for air passengers, but the southern neighbors go one step further. Wednesday showed that the European Commission as critical about.