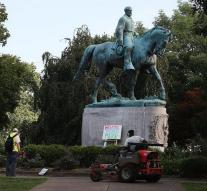 charlottesville - The mayor of Charlottesville, Mike Signer, asked Virginia governor Terry McAuliffe Friday to write out a general meeting of House and Senate as soon as possible. The parliamentarians can then legally make it possible for a municipality to determine its policies regarding monuments that remind the Confederation at the time of the American Civil War.

The threatening removal of a statue of General Robert E. Lee, the captain of the southern states opposed to abolition of slavery, led to a march of right-wing extremists who died in chaos in the city with a dead and injured last week.

Signer said in a statement to find that those memorials go to a museum, cemeteries or something like that, but it is clear that 'they can no longer serve for tribute at public places for common use such as the Charlottesville shopping mall. '