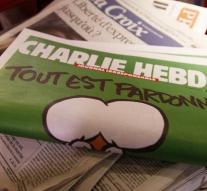 - The satirical French magazine Charlie Hebdo get a German version. The first German edition appears next Thursday with a circulation of 200,000 copies, reported German and French media. That there are nearly twice as many prints as a weekly from the French original.

Initially will be in the German 'Charlie' especially from French translated articles and drawings. It is intended that in due course be made exclusively German contributions.

Charlie Hebdo was hit on January 7, 2015 by a bloody attack. Extremist Muslims shot twelve people dead on the editorial board of the magazine in Paris. In the aftermath of the violence marked the creators which was great interest in Germany for their paper. Of a special edition survivors' went to Germany about 70 000 over the counter.