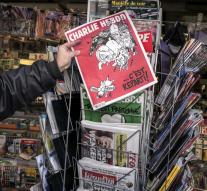 - The satirical French weekly Charlie Hebdo distributed approximately 4.3 million among victims of the terrorist attacks earlier this year in Paris. The magazine was a victim when on January 7, two heavily armed terrorists broke into the office of the editor and twelve people killed.

The ailing magazine was flooded after the attack with gifts from supporters. More than 36 000 people from 84 countries with a gift expression of their solidarity.

Recently there was uproar in France over what was to happen to the money. Charlie Hebdo on Wednesday made ​​clear that the money in the next few weeks will be distributed to the victims or survivors of seventeen people were killed from 7 to 9 January. In the days after the attack on the editor of Charlie Hebdo attacked in Paris five deaths at the hands of other terrorists, including in a Jewish shop.