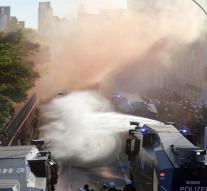 hamburg - The riot police in Hamburg charged charges on Thursday evening with an anti-G20 protest march. This was detained by the police with vehicles with water cannons because displaced participants were among the activists.

When the police were bullied with bottles, it was decided to intervene. The police used watercraft among other things. Heavy fireworks were also cut off by the extremist group Zwart Blok. Despite the aggression, it was striking how quiet the police remained.

There are about 12,000 participants in the demonstration Welcome to Hell, which according to the police have about one thousand face coverings. If they dismiss their disguise, the demonstration will be passed on.