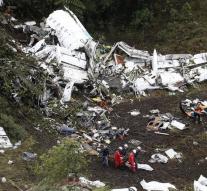 bogota - The plane that crashed on November 28 with a portion of the Brazilian football team Chapeco Cooking on board, faced with a shortage of fuel. Also, the plane 350 kilos overloaded, according to research from the Colombian authorities.

From the flight data recorder recordings also show that the co-pilot, the pilot repeatedly warned the fuel shortage and that pilots two minutes before the crash raised the alarm.

The unit of the Bolivian society Lamia crashed in Medellin. Of the 77 passengers, only six people survived the crash.

Earlier it was already clear that human error was the cause.