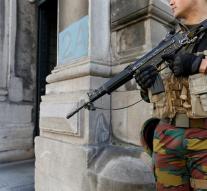 brussels - The criminal proceedings against members of the terrorist cell that was rolled in the Belgian Verviers early last year, began Monday chaotic. The trial began later and had to be put stop much earlier than planned.

The Public Prosecution sixteen suspects, but only seven are present. Of the others, which in default, are believed to be in Syria. The Dutch suspect, Zaid Koulliss is not present at the trial.

The trial began immediately upon request by a number of lawyers of the suspects. They can not by their clients produce the strikes in several Belgian prisons prior to the trial.

The day also ended earlier than expected. The process was suspended around 15. 30 hours because security personnel refused to work after 16. 00 hours. The staff will include suspects from the prison to the courtrooms and monitors public and the press on arrival. The staff is unhappy about some terms and therefore they had this spontaneous-rule.

When police raid in Verviers, near Liege, arrived in mid-January 2015 two suspects were killed. Two others escaped, among them the then eighteen Koulliss.

On that police action was arrested one person. Later, following multiple arrests.

The terrorist cell would police targets in the eye have had attacks. The leader of this network would be Adel Hamid Abaaoud. He was one of the perpetrators of the terrorist attacks in Paris in November. In a police operation a few days later he died.