Home / World / Chaos by US fire 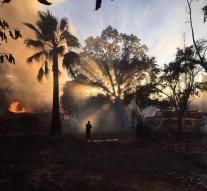 - In the US state of California are 82,000 people evacuated because of a rapidly growing forest fire. People are placed in various places, including in the gymnasium of a school so notify the sheriff and fire departments via twitter. The fire spreads rapidly. Fifteen fire brigades try to fight the fire, another 750 employees are on the move.

Several firefighters got stuck by the blazing fire with injuries. The state has long been plagued by major forest fires. Thousands of hectares are affected, including in the Los Angeles area where the summer fire started by an illegal campfire was left unattended.