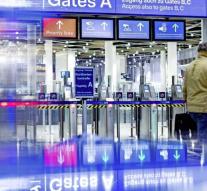 dusseldorf - Part of Düsseldorf's airport was evacuated on Friday after people who had not been checked turned between people who were. According to German media, who spoke of a...

The airport authorities decided to let all passengers go through the security check again. Passengers who were already in a departing plane had to get out and re-pass the check. Passengers in aircraft that had just landed were not allowed to disembark.

It is not known how many travelers it was. How the uncontrolled persons entered the zone is not clear.