Home / World / Chaos at airports Australia due to strong winds 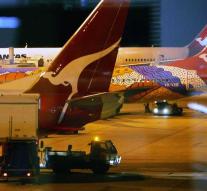 sydney - Strong winds have led to chaos at the two busiest airports in Australia. Thousands of travelers were stranded at the airports of Sydney and Melbourne after many dozens of flights were scrapped.

In Sydney only one runway was available, which made at least 76 flights. In Melbourne, only half of the planned number of flights could continue.