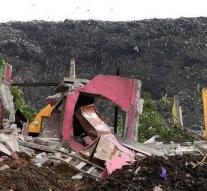 colombo - The hope that there are survivors found Sunday largely gone in the garbage shifted in Colombo. Over a thousand rescuers throughout the day was occupied with the search for victims and clean up. They put on the work Monday.

The police have so far recovered 26 bodies. Possibly are a hundred people buried under the mud and garbage.

The 90 meter high mountain of garbage on the outskirts of the commercial center of the capital of Sri Lanka plunged Friday due to fire and rain. Numerous houses were buried.