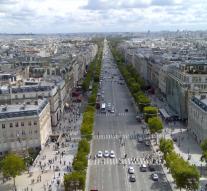 amsterdam - The Avenue des Champs Elysées in Paris is that rent for the most expensive shopping streets in Europe, closely followed New Bond Street in London. According to a study presented Wednesday at the international property specialist Cushman & amp; Wakefield.

No Dutch shopping achieve the European top ten. In the Kalverstraat in Amsterdam merchants are by far the most expensive option, with a rent of 2900 euros per square meter per year. The capital is one of the few cities in our country where retail rents in the past year have not been dropped.