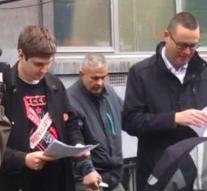 amsterdam - The flamboyant spokesman for the extremist Walloon party PVDA was attacked by a knife shortly before a speech on Labor Day. The Walloon Chamberlain Raoul Hedebouw was stuck in Liège in Liège and became light-wounded. The incident has popped up.

It can be seen that Hedebouw is approached from behind by a man aged between forty and fifty years. He has a short knife and puts it on Hedebouw. The parliamentarian does not seem to notice anything right away, but he returns. There is even light panic. The man is then counted. There is nothing known about his motives. According to Belgian media, the man called 'the PVDA, its idiots'.

Hedebouw was able to keep his speech in spite of the knife sting. At the end he was taken to hospital for control. The PVDA has two MPs and is doing well in the polls. The party is seen as a threat to PS, which has been in power for decades in the French-speaking part of Belgium. Premier Charles Michel has condemned the attack against Hedebouw.