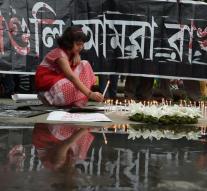 - Among the twenty kill the hostage in Dhaka in Bangladesh are certainly nine Italians. That stated, the Italian foreign minister Saturday. One Italian is missing.

Heavily armed men stormed Friday a chic Spanish restaurant. All Bengal had to get up and leave, the foreigners had to stay. Ultimately there were twenty death. Thirteen people were rescued Saturday when commandos invaded the building and put an end to the hostage. Six offenders were killed.

The identity of the other deaths is uncertain.