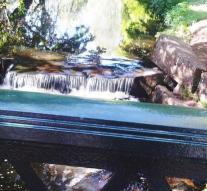 islamabad - Due to the collapse of a footbridge over a river in the Pakistani part of Kashmir, at least five people were killed, eight others were injured. A spokesman for the Neelum district said that there are still 11 missing people. The death toll will probably rise. The rescue action continues unabated.

The walkway in the Neelum valley, according to local media, has collapsed under the weight of dozens of tourists who stopped at the same time to take pictures. Most were students from central Punjab province. Neelum is a popular holiday resort that attracts large numbers of visitors every year.