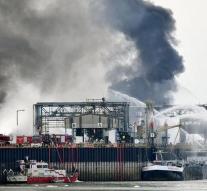 - By a heavy explosion on the grounds of the German chemical company BASF in Ludwigshafen and the fire that followed, at least two deaths. This was announced by the local authorities Monday night. For two missing people is still being sought. Six people were seriously injured.

The company told a person to have seen with minor injuries, but considers it likely that others have been treated elsewhere. Air measurements have shown that there is no danger to public health. What substances are released exactly is still unclear, as is the cause of the accident. There are precautions taken to prevent polluted water flows into the Rhine. That does not happen so far.

The director of the establishment Ludwigshafen, Uwe Liebelt, said first delivery pipe had caught in the harbor flame. When the fire brigade arrived for firefighting, the blast originated which was heard for miles around. The plume of smoke could be seen outside the city. The fire, including contested from a fireboat is now under control and should extinguish.

The accident happened at the end of the morning, during work on the pipeline network, where raw materials are pumped from ships to the production sites in the factory. Indications of an attack are not there.

For security are made as soon as possible two naphtha crackers and twelve other petrochemical plants in operation. The substances which were still in the pipes are flared. About the economic damage would Liebelt say. ' At the moment, that is absolutely not my biggest problem. Our thoughts go out to the victims and their families. ''