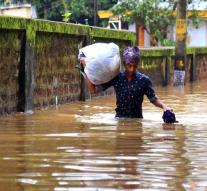 new delhi - The monsoon rains, which have persisted for days, have killed at least 37 people in the south of India. Most victims in the state of Kerala drowned or were swept away by landslides. The authorities have informed that.

The death toll is probably still rising. Rescue workers have not yet been able to reach some remote areas. The Flood began on Wednesday. On Saturday it cleared up, but meteorologists predict rain again.

So far, 36,000 people in the lower areas had to leave their homes. The government provided emergency shelters in 350 places. The mountainous region of Idukki is heavily affected, where at least eighteen deaths are to be regretted. According to local media, army units have put 54 tourists who were trapped in a hotel into safety.