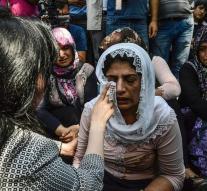 ankara - Certainly 29 children were killed Saturday during the bombing of a Turkish wedding last in the southeastern city of Gaziantep. That, Turkish news channels reported on Monday. A young teenager blew himself up, causing 51 people died. Meanwhile, there are 44 people identified.

On surveillance cameras shows that the child was accompanied by two people. The identity of the boy is not yet known and the attack so far has not been claimed. Minister Recep Tayyip Erdogan suspects IS behind it.

Sunday was prevented another attack when police in Iraq's Kirkuk discovered a bomb belt in a boy of about eleven years. The bomb belt was removed in the street, after the child was arrested.