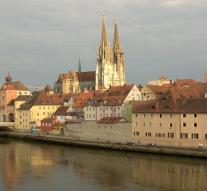 regensburg - Priests and teachers of the famous cathedral choir in the German city of Regensburg have in recent decades abused at least 231 choristers, mistreated or tortured. Lawyer Ulrich Weber, who last year commissioned by the diocese spoke consulted with numerous stakeholders and secret archives, fears that the actual number of victims is even higher. He estimates that about a third of the 2100 students who came to Regensburg between 1953 and 1992 involving physical violence has been affected.


In fifty of the 231 cases involved sexual violence. In addition, the varied acts of fondling to rape. Other boys said they were beaten bloody with a stick, key ring or seal ring. Children who had urinated were allowed to drink anything else in bed.
Most crimes are now barred. Internally, Weber was already known what was happening, but for fear of personal consequences and the choir was nothing done about them. Thus, the number of victims is much higher than the 72 cases that were previously known. The diocese has victims Euro 2500 in prospect.
NEW