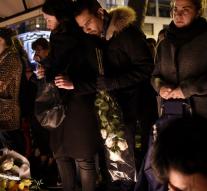 - By the attacks in and near Paris, Friday nights are definitely 129 deaths. That said Public Prosecutor François Molins Paris against the newspaper Le Figaro. There are 352 people injured. Of these, 99 are in critical condition, said Molins. There are seven slain terrorists. The Public Prosecutor has opened a criminal investigation.

Among the fatalities are definitely five foreigners : two Belgians, a Portuguese, a Spaniard and a Briton.

According to the Ministry of Foreign Affairs in The Hague three Dutch have been injured, two men and a woman.