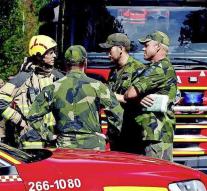 stockholm - In the center of the Swedish capital Stockholm an explosion has been in a bus.

According to the police, there were no passengers on the bus. The driver would have been free with the shock, reports the Swedish police. The bus burned out completely.

The explosion occurred around 11.30 hours before the entrance to the Klaratunnel. Large clouds of smoke hang over the city. Presumably the gas tank has exploded on top of the bus. The police take into account that the gas tank exploded when the bus rammed the height markings in front of the tunnel.