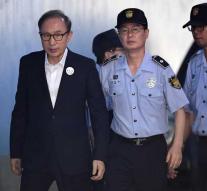 seoul - Former president Lee Myung-bak of South Korea was sentenced to 15 years in jail for corruption on Friday. He must also pay a fine of approximately 8.5 million euros. The court in Seoul ruled that Lee was guilty of, among other things, abuse of power and taking bribes from companies.

The 76-year-old Lee accepted more than 5 million euros from Samsung for a business of the former president's brother, reported the South Korean news agency Yonhap.

Lee was head of state from 2008 to 2013. He has always denied that he is guilty of fraud. The accusations to his address he called 'politically motivated. '

Park Geun-hye, who succeeded Lee as president, was sentenced to 25 years in prison in August this year on appeal. She was found guilty by the court of justice for abuse of power and bribery.