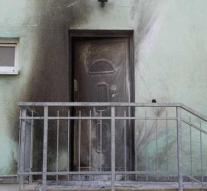 dresden - A court in Dresden in Germany sentenced a 31-year-old man to nine years and eight months in prison for two bombings at a mosque and a convention center in 2016. Among other things, he was found guilty of attempted murder.

The man has admitted to have made the pipe bombs with which the attacks were committed. He fought that he wanted to kill someone. In the mosque, the imam and his family remained unharmed by chance.