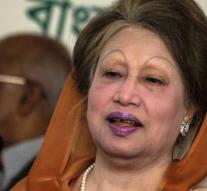 dhaka - A court in Bangladesh sentenced opposition leader Khaleda Zia to five years in prison. As prime minister, she would have eclipsed about 200,000 euros with her son and co-workers, money that was meant for a charitable institution.

The judge said he had taken into account the 'health and social status' of the 72-year-old politician. Her son Tarique Rahman, vice-president of opposition party BNP, and four other suspects have been sentenced to prison terms of ten years.

Zia is a political opponent of Prime Minister Hasina. A senior BNP official called the lawsuit 'an attempt to eliminate a rival. 'Supporters of the opposition party clashed in the capital Dhaka before ruling with the police. Agents used tear gas to disperse demonstrators.